A lovely summer night at Musik over Præstø Fjord Festival! 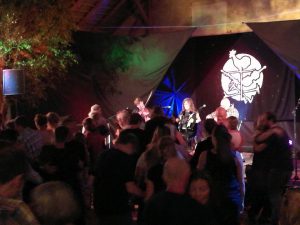 Jensen, Bugge & Høirup on stage in ‘Danseladen’, one of several stages at Musik over Præstø Fjord Festival, on August 11th 2017.

In August 2017 Musik over Præstø Fjord Festival celebrated their 9th year as a festival, and Jensen, Bugge & Høirup was there, introducing our version of a ‘dance concert’.

The idea is to arrange and play music for traditional dancing, in a way that is great for as well the dancers as for people turning up just to listen.

We spent some time together in July touring the Faroe Islands, and while doing that, we also found the time to arrange new sets of traditional dance music, combined with our own compositions.

The result was presented in the old dance barn at Musik over Præstø Fjord Festival, and it was a great success from the very beginning.

What we thought might end up as a quiet ‘chamber concert’-like dance situation, developed into a pretty rock `n’ roll kind of party, with a lot of happy people listening, dancing and singing along on our new material,

We certainly had a blast, and Josh Stærk recorded it all, while Grete Jensen – Mette’s sister – and a colleague of hers, Kevin Pedersen, caught it all on video. Here is one of the videos, find more on this site as we upload them!