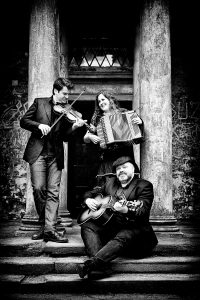 Accordion player Mette Kathrine Jensen, violinist Kristian Bugge and guitarist and singer Morten Alfred Høirup, focus on the traditional Danish music, and the many stories it tells about people living together in communities, supporting each other, and about life in general.

The repertoire consists of dance tunes and songs from different areas in Denmark, spiced up with a few new tunes composed by the trio, following the spirit and the tradition of the old players and tradition carriers.

Jensen, Bugge & Høirup has visited many of the little islands and other remote places around Denmark, where we still find the traditional music and songs being passed on from generation to generation.

This has made them good storytellers as well as specialists in the many different musical dialects in the old traditional music of Denmark – a knowledge that they are utilizing when playing for concerts as well as dances.

One of Jensen, Bugge & Høirups specialties is to play what they call “Dance Concerts”, where the music has been arranged to fit a traditional dance situation, as well as a real concert, at the same time.

The result is a musical experience, which is as exciting for the dancers, as it is for the listening audience – these dance concerts are introduced and instructed by the trio members themself.

All members in this trio has received a number of Danish Music Awards (Danish “Grammy”), for their work with the Danish roots, folk and trad music, and Kristian and Mette are both “Rigsspillemænd”, recognized for their serious and very focused work with the traditional music.

Together they have toured and performed in clubs, city halls, culture houses and festivals in Denmark, Norway, Faroe Islands, Germany and Canada.

In the summer of 2015 the band released their first album as a trio, which earned them a nomination for a Danish Music Award.

They have also recorded two live albums with the old Danish-American accordionist and violinist, Dwight Lamb from Iowa.

Now they are ready to present a few videos featuring tunes and dancing from a magical dance concert that they performed at the little exclusive festival “Musik over Præstø Fjord”, in August 2017.